It is important to note that benefits for Senior Performers are offered through the SAG-AFTRA Health Plan and are not part of the benefits provided by the AFTRA Retirement Plan or the SAG-Producers Pension Plan. Like all benefits under the SAG-AFTRA Health Plan, Senior Performers benefits are not guaranteed and may be amended, modified or terminated at any time for those who are or may become covered by these benefits.

The Plan offers coverage to retirees (and their qualified Dependents) who meet each of the following criteria:

Participants Who Have Accrued AFTRA Qualifying Years Only

Participants Who Have Accrued SAG Pension Credits Only

If you have accrued SAG-Producers Pension Plan pension credits toward retiree health coverage and you have not accrued any qualifying years under the AFTRA Health Plan, you will carry forward all your SAG pension credits earned as of January 1, 2017.

Generally, if you have accrued both qualifying health years and pension credits toward retiree health benefits, you will be able to carry forward the greater of: 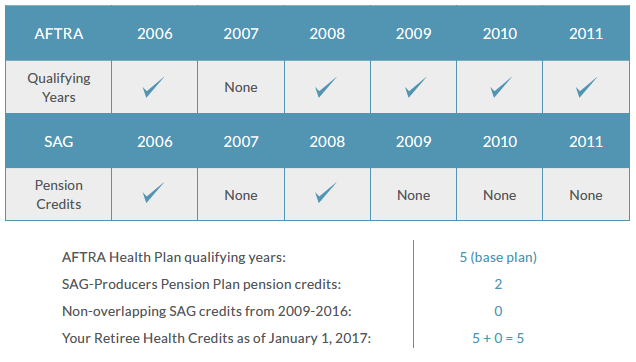 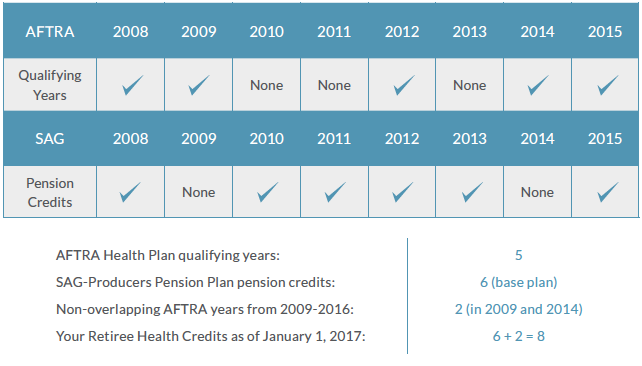 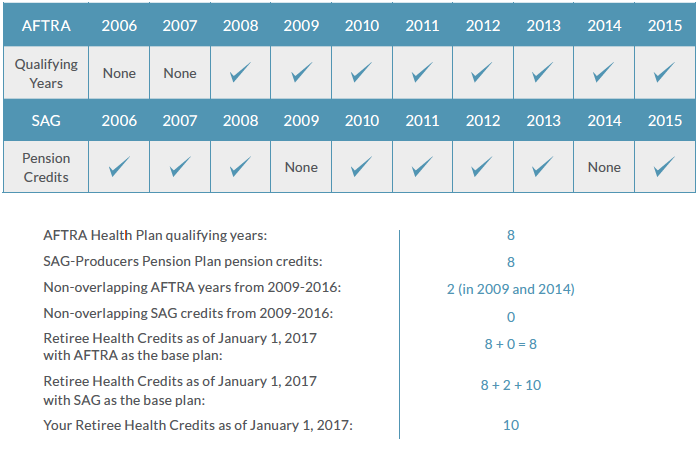 Participants who have earned a qualifying year under the AFTRA Health Plan or a pension credit under the SAG-Producers Pension Plan as of December 31, 2016 will receive a letter from the Plan indicating their number of Retiree Health Credits. If you have not received your letter by February 2017, or if you have questions about your Retiree Health Credits please contact the Plan at (800) 777-4013.

In order to be eligible for an occupational disability pension, your injury must have occurred while working under a Collective Bargaining Agreement for which contributions were made to the SAG-Producers Pension Plan. For a complete description of the occupational disability pension requirements, please refer to the SAG-Producers Pension Plan SPD.

Senior Performers coverage will provide coverage secondary to Medicare for Hospital and medical benefits – unless you regain Earned Active Eligibility. You must be enrolled in Medicare Parts A and B to qualify for full Plan coverage. If your spouse is age 65 or older, or qualifies for Medicare due to disability, your spouse must also be enrolled in Medicare Parts A and B to receive Dependent coverage under the Plan (when the Participant is a Senior Performer). You and your spouse do not need to enroll in a Medicare Part D Prescription Drug Program, as pharmacy benefits are included with Senior Performers coverage. Please see here and here for additional information about coordinating benefits with Medicare.

Your Senior Performers eligibility may be replaced with Earned Active Eligibility:

You will receive earned Plan I coverage and Medicare will become secondary to the Plan. Please refer to “Coordination of Benefits With Medicare.”

Surviving Dependent Eligibility Following the Death of a Participant

The Surviving Dependent benefit is provided to your Dependents if at least one of the following applies:

If, as of December 31, 2016, you are eligible for or are receiving health coverage as a surviving dependent under either the AFTRA Health Plan’s Senior Citizen Health Program or the SAG-Producers Health Plan’s extended spousal benefit, you will be eligible for Surviving Dependent coverage under Plan I of the SAGAFTRA Health Plan beginning on the later of January 1, 2017, or the date the Participant would have turned 65.

The Plan requests verification of the marital status of all surviving spouses covered under this benefit annually during the Open Enrollment Period. Eligibility for this coverage will not be extended unless the Plan receives a completed questionnaire.

In some cases, Dependents may be able to continue coverage under COBRA after their eligibility for Surviving Dependent benefits ends (see “Special Rules for Dependents”). Your Dependents will be notified by the Plan if this additional coverage is available.

Note: Surviving Dependent benefits are not guaranteed and may be amended, modified or terminated at any time.